My husband and I participated in the Multiple Myeloma Research Foundation's Race for Research 5K Run/Walk at Carson Beach in South Boston on September 15, 2012. There were over 1,500 participants and supporters who have already raised over $300,000 for the MMRF. If you would like to contribute to my team - the Myeloma Mashers (heh) - please click here. Donations can still be made until December 31st.

It was a really fun morning – beautiful location and despite the rain, we had a great time! Luckily, the rain stopped just in time for the race to begin. 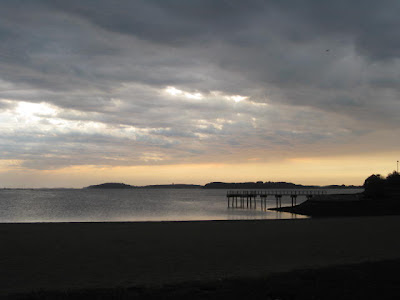 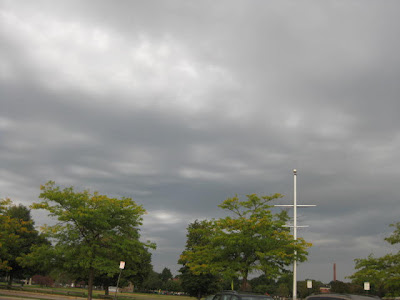 The clouds looked a little ominous. 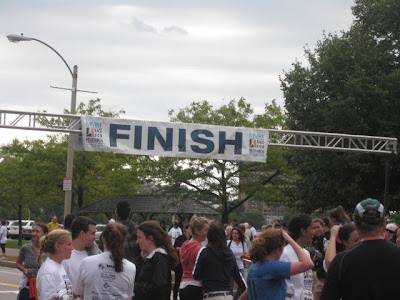 We registered as walkers but ended up running…the energy of all the participants was really contagious! There are still a few races left this season if you are interested and live in the areas below. (Plus you get a free t-shirt! Who doesn't like free t-shirts?!)

Additional information about the MMRF and the Race for Research (taken from MMRF Race for Research Website).
The MMRF Race for Research 5K Walk/Run is an event to raise awareness and funds for research of multiple myeloma, a type of blood cancer. Held annually in nine cities across the country -- Atlanta, Boston, Chicago, Philadelphia, San Francisco, St. Louis, Tri-State (New Canaan, CT), Twin Cities, and Washington, DC -- this family friendly 5K walk/run raises both awareness and funds for multiple myeloma. Since its inception in 2001 in Chicago, the MMRF Race for Research program has raised more than $17 million to support the Multiple Myeloma Research Foundation’s urgent work. Participation offers camaraderie and knowledge sharing for patients, patient family members and friends, members of the myeloma community, and others.

The Multiple Myeloma Research Foundation (MMRF) was established in 1998 as a 501(c)(3) non-profit organization by twin sisters Karen Andrews and Kathy Giusti, soon after Kathy's diagnosis with multiple myeloma. The mission of the MMRF is to relentlessly pursue innovative means that accelerate the development of next-generation multiple myeloma treatments to extend the lives of patients and lead to a cure. As exceptional stewards of its donors' investments, the MMRF consistently surpasses its peers in fiscal responsibility and an outstanding 90% of total budget go directly towards research and related programming.


The work of the MMRF has contributed to the FDA approval of four drugs for multiple myeloma in just four years - a track record unparalleled in oncology. These same drugs are now being explored as potential treatments for more than 30 other cancers. An outstanding 90% of the MMRF’s total budget goes directly to research and related programming. As a result, the MMRF has been awarded Charity Navigator’s coveted 4-star rating for nine consecutive years, the highest designation for outstanding fiscal responsibility and exceptional efficiency.
Posted by Elizabeth at 3:17 PM No comments:

But, I don't write blogs. I don't read blogs.

I always used to think, “People who write blogs must have too much time on their hands! I would NEVER become a blogger!”

Over the past few months I have gone a little crazy reading blogs about Multiple Myeloma. Catching a glimpse into patients’ lives by reading their blogs from their initial diagnosis to present day has been really eye opening. I have learned so much about the disease by reading their stories. However, I have not found many blogs featuring women my age and diagnosis. I am not a Myeloma "expert" by any stretch of the imagination. I am learning as much as I can and I am hoping that by sharing my experiences, I can connect with the Myeloma community and maybe even help other patients in my situation.

I was diagnosed with Monoclonal Gammopathy of Uncertain Significance  when I was 25 years old.

Three summers ago I was having a series of symptoms - joint pain, headaches, fevers etc. and was put through an extensive amount of tests through my PCP as well as a rheumatologist. Most of these tests came back negative and were inconclusive. The only significant finding was that there was concentration of protein in my blood called an m-spike. I, of course, googled this and found Multiple Myeloma, a type of blood cancer. I had never heard of Multiple Myeloma; leukemia and lymphoma sure, but not Multiple Myeloma. After a little bit of research, I knew there was NO way I could have THAT because I wasn’t a 70 year old man!

I was referred to a hematologist who diagnosed me with Monoclonal Gammapothy of Unknown Significance (MGUS). MGUS is a benign, asymptomatic, condition in which there is an excess level of a protein in the blood. Patients with MGUS are at an increased risk of developing Multiple Myeloma. Multiple Myeloma is treatable, but not curable. MGUS is considered to be a precursor disease that typically progresses at a rate of 1-2% per year. I was told at the time the only treatment for me is “careful observation” - a terrible “treatment” for a stress case like me!


Shortly after my initial diagnosis, I was able to start seeing a great hematologist/oncologist at Dana-Farber Cancer Institute in Boston. For my first appointment I had to do the dreaded 24 hour urine collection, skeletal survey, PET/CT, plus a million blood tests. Everything looked relatively normal and with my m-spike so low (it was .16 at the time) my doctor felt comfortable monitoring me every 6 months as well as holding off on a bone marrow biopsy.

Honestly, at that time, I scoured the internet reading everything that I could about MGUS and Multiple Myeloma. Then, after a few appointments, I really didn’t think about my diagnosis too much in the interim. For the most part, those first three years of appointments at Dana-Farber were more of an annoyance than anything – lots of blood tests and urine collecting (gross I know!). I was not too concerned as my prognosis was good and I was classified as “low risk MGUS” (low M-spike, IGG protein, free light chain ratio was normal, other blood tests seemed fine). However, it was concerning that I was only in my 20s…I had a lot of years left to live, and ultimately, a lot of years for the MGUS to possibly progress to Multiple Myeloma.

I didn’t really tell many friends or family about my diagnosis. I simply explained to a select few that I had an extra amount of protein in my blood and was getting monitored at Dana-Farber. This, of course, freaked people out – having to go to a “Cancer Institute” and all. Plus, none of them had really heard of Multiple Myeloma or MGUS in particular. I know I hadn’t! So, I pretty much stopped talking about it outside of my immediate family. I was going to be fine anyway!


Skip ahead to this past April. At my usual 6 month appointment at Dana, I discussed the possibility of becoming pregnant and starting a family. At the time, I had no real reason to believe (it really hadn’t crossed my mind, to be honest) that MGUS would be any sort of issue in this particular aspect of my life.


Typically at my Dana-Farber appointments, research fellows and/or med. students come in to speak with me before I see my actual doctor. Someone diagnosed with MGUS at my age is pretty rare and I often feel like an animal at the zoo!  At this particular appointment, the lovely research fellow of the day answered my question regarding pregnancy stating that if I wanted to have children I should make sure to have them “sooner than later.”

This was obviously a bit upsetting. What happened to being “low risk” - no problem??


Well, when my actual doctor finally came in he was VERY reassuring (and I think a little horrified how upset the research fellow had made me) that I would most likely be fine to have children, however, he did want to do a bone marrow biopsy to check for the level of plasma cells within the bone and bone marrow. I was a little freaked out by this, but I knew a bone marrow biopsy was a test that would be coming eventually.

My doctor hoped that the plasma cell levels would be below 5% which would give me a green light to start a family. If the plasma cells were between 5-10% I would need to be a little more cautious. And finally, if the plasma cells were between 10-15% that would knock me out of the MGUS category into what is called Smoldering Myeloma (one step before actual Multiple Myeloma –still asymptomatic). My doctor spoke of the possibility of pregnancy progressing my disease. Plus my m-spike was slowly clawing up - from .16 to .36 – over 3 years, slow right? Right?? At least I thought so. But again, I was reassured I was going to be FINE. Low risk, no problem, no big deal...

I had the biopsy done (um, OUCH, not a good time!) andddd of course, the results were a bit higher than we had hoped. I was called to come into the office to discuss the results - I didn’t get the, “Everything looks great! Less than 5%! No big deal, no problem!” phone call I had been hoping for.


The aspirate showed 3% plasma cells (focally higher, including atypical forms), the core biopsy showed 10-15% plasma cells, but 6-8% of the intertrabecular space. We “struck oil” so to speak. Basically, the long and short of it is, my doctor said that based on the biopsy I was borderline MGUS/Smoldering Myeloma due to the 6-8% / 10-15% plasma levels. Yikes.

Anyway, in December I will have a repeat biopsy to assess any changes in cellularity and a MRI. I had another PET/CT in August and that was totally normal. My m-spike as of September 5th was .39. All other blood tests were within the normal range - except for my kappa and lambda light chains – they have always flagged as low - but the ratio is normal.