How is it already December? This year, for the month of November, J and I completed our "Thankful Tree" like we did last year. The teacher in me enjoys such endeavors. Unfortunately, this year, due to the fact that we have a very, very active little monster in our house named Hennessy, this was the only place we could display the Thankful Tree to keep it from being attacked... 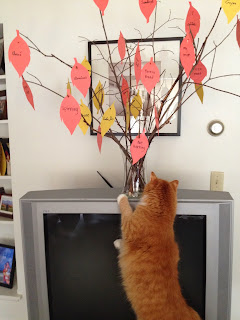 And, yes, we are the only people left in the world that have an old school TV.

In other news, J and I had a very random encounter at the Spartan Race at Fenway Park in Boston a couple weeks ago. 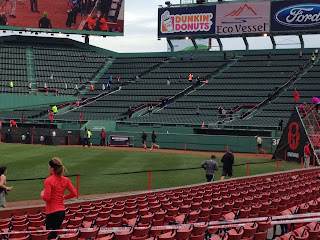 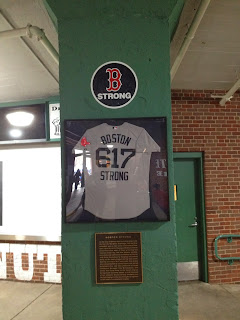 J has an uncanny ability to spot and/or recognize the most random people. As we were looking for registration, J decided to approach one of the Spartan Race volunteers to figure out where the heck we were supposed to go. As we started to speak with this volunteer J all of a sudden said, "Hey, you did her bone marrow biopsy!"

Hmmm. Huh? We realized that yes, this was the nice PA named Zach who did my second bone marrow biopsy at Dana-Farber. I say "nice PA" but I really should say, "the PA who did not hit my sciatic nerve." Thank you, Zach for not hitting my sciatic nerve during my second bone marrow biopsy. Zach and I both agreed that we would never have recognized each other as I was facing away from him during the entire procedure. Heh. Zach told me to make sure I request to have him for my next bone marrow, which should be sometime next year. Indeed. I definitely will.

And finally, a little update on my shoulder situation. 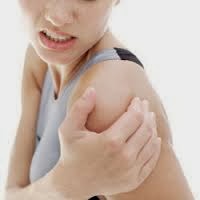 This could be me. Wishing I could have an arm replacement. Cursing the idiot nurse who did my flu shot into my shoulder joint.

I had the EMG test. The orthopedic doctor I saw recommended this test because he suspected I might have nerve involvement which could be causing my pain and weakness of my deltoid muscle. Ouch. Not the most comfortable test. The EMG showed abnormalities in my axillary and suprascapular nerves (which affects the deltoid and infraspinatus muscles) and the neurologist I saw last week suspects that I have something called "brachial neuritis". The upshot of the neuro consult was that nerve reinnervation takes forever to occur and 18 months from now (yes, that's a year and a half) whatever strength I regain will be it. Very disconcerting and I really hope my nerves get their act together because I'd like to be able to use my left arm again. :(