I decided to send an email to Dr. R to see if I could drop off the MRI of my shoulder for him to take a look at when he got a chance. I also mentioned to him the 1.75cm mass that was found on (in?) my upper left arm during PT while the therapist was massaging my shoulder. She had told me to show my doctor (which one?!) so I figured I'd mention it to him. I sort of blocked that out and never told anyone. Whoops. I kind of thought he would defer to my PCP. Anyway. Dr.R responded right away and said that he would like to see me to see the MRI and take a look at my "little lump." He said there was "no mad rush but suggest we squeeze you in fairly soon."

Baaaack to Dana-Farber I go!

Posted by Elizabeth at 1:29 PM No comments:

Orthopedic Surgeon says, "Did you get hit with a hammer?"

So, I met with an orthopedic surgeon named Dr. T to go over the next steps in treating/resolving my flu shot induced shoulder pain.  During my appointment, he reviewed the MRI films and the radiology report. Overall, the MRI showed inflammation, bursitis, partial bursal tears, a collection of fluid (probably the vaccine!), and tendinitis. Not, "terrible things" as Dr. T put it and nothing warranting surgery, which already knew. However, he was concerned when he saw the state of my bone. He said it looked like I had been hit with a hammer. 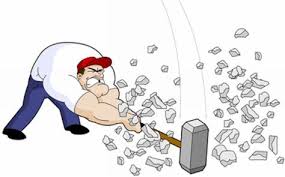 He asked me if I had been having fevers or night sweats because he was concerned about infection of the bone. I told him I’ve had fevers for 4 years and had smoldering myeloma. He asked me when I was seeing my doctor. I said I actually just saw him and he replied, “Oh so he saw these images?” I said no and that I had told Dr. R about my shoulder pain but didn’t show him the MRI. I mean...why would I?! Dr. T said, “Your doctor really needs to see this.”

I totally freaked. Inside, of course. Well, partially outside. Not unusual for me these days.

In my head thinking rationally I knew that myeloma does not cause edema/contusion of the bone (right??) but he kept going on about how the bone was abnormal and Dr. R needed to look at the MRI.

Dr. T wondered outloud, "Is this myeloma? Is this infection? Is this where he jammed in the needle? Not really sure."

So I saw Dr. R this past week. My appointment at DFCI was scheduled for 4:30 but I knew from past experience we would NOT be out of there until at least 7:00 or 8:00. ;) Via Patient Gateway I knew all my results ahead of time… my m-spike was up (which is the case at every appointment) and my CRP was high. Everything else looked pretty stable. In my opinion.

Prior to meeting with Dr. R I met with a myeloma specialist from Milan. To be completely honest, I'm not sure I understood one word she said and visa versa. Lost in translation! Oh well.

A while later Dr. R came in. He told me I was, "Last but certainly not least." Heh. I went into the appointment sort of assuming that I would hear, “Oh everything looks good, small increase, stable, see you in 3 months.” Such wasn’t the case overall. I have been having fevers since I was diagnosed with MGUS 4 years ago and I was reclassified as SMM last summer. After seeing numerous other specialists, Dr. R and my ID specialist concluded that the plasma cells were driving/causing my fevers. Anyway, during this appointment I actually had a fever of 102.2. After him having witnessed me having a fever for the first time - I’d never had one at an appointment before - he reiterated again the plasma cells are causing the fevers and he has seen periodic fevers happen in people with smoldering myeloma or symptomatic myeloma. He was also concerned my CRP was up as this is indicative of the level of IL-6 activity which is important in keeping myeloma cells alive/growing. So that's not good.

He told me to make sure to get a prescription for biaxin specifically if I do develop a sinus infection, respiratory infection, etc this winter along with fever as biaxin targets IL-6. He said he might consider at this time putting me on biaxin on a continuous basis. Biaxin is actually used in treatment of multiple myeloma in combination with revlimid and dexamethasone. But he said being young and female that probably wouldn’t be the best as continuous antibiotics can cause yeast / stomach upset. He said that if my m-spike continues to creep up and my BMBs increase we’ll need to “start the conversation” about treatment which may be “an antibody, vaccine, or immunomodulator.” I almost fell over that he even brought up the "T" word as I truly pray I am not there yet and won't be for a long, long, time.

Dr. R did say he believes my condition is evolving as my m-spike has grown consistently over the last 4 years as well as the fevers I've continued to experience. He again talked about how aspirin is going to be used in clinical trials for MGUS/SMM patients as it targets IL-6. He suggested continuous aspirin for me back in April but I stopped taking it but I should probably try to start taking it again. He also suggested trying naproxen in addition to daily aspirin to treat the fevers when I have them. I swear the amount of Tylenol/Advil/aspirin/naproxen I've taken over the last 5-10 years is going to cause me severe liver damage! He wants me to go back in 2-3 months for blood work and 24 hour urine. Monitoring me very, very carefully is the plan. Awesome.

I mentioned my shoulder pain from the wrongly administered flu shot and told him I had an MRI and had been referred to an orthopedic surgeon who I would be seeing soon. He was apologetic but nothing he can really do about that obviously. At the end of the appointment and to some degree "lighten" the mood I showed him a photo that was made by Myeloma Survival.

He totally cracked up. Wellllll...he IS a myeloma rock star. AND we actually walked out of Dana-Farber around 7:00PM - not too bad. AND they actually now have a receptionist working there now until 8:00PM.

Today I have an an appointment with Dr. R at DFCI. This is my fourth quarter visit this year which will (hopefully) be my last visit of 2013. I know it's only November, but I am glad to see 2013 go.

Interestingly my first visit with Dr. R was just around this time 4 years ago - November 16, 2009. My m-spike that had been found that July was just a "trace" of IgG lambda and I was "officially" diagnosed with MGUS in August/September. After seeing a local hem/onc and getting my official MGUS diagnosis I decided to go to Dana-Farber. What an interesting 4 years it's been. I got married, changed jobs, moved (twice), got upgraded to smoldering myeloma, and had millions of blood draws, 24 hour urine, MRIs, PET/CTs, CTs, skeletal surveys, etc.

My first visit with Dr. R back in November 2009 was almost 2 hours long. I was the last patient of the day and Dr. R had to let me out of the old Dana-Farber building as all staff had left and the custodian was vacuuming. I believe my appointment was scheduled for 3:00 and we didn't leave until almost 8:00. I thought that might be a one time thing but the wait times and leaving at 8:00 when I have a late in the day appointment have just been things I've come to accept. :)

Hopefully this will be an uneventful visit!
Posted by Elizabeth at 9:06 AM No comments:

Well, I had my 3 month blood and 24 hour urine tests last week. Everything is looking... okay. Some numbers up, some numbers down, m-spike up. My m-spike is at the highest level it's ever been since it was discovered in July 2009 when it was just a "trace" of IgG lambda. I head to Dana-Farber to meet with Dr. R this week to discuss.

In other news, my shoulder saga continues. I still cannot believe all of this has happened from a FLU SHOT.  After a few sessions of PT with no improvement and significant pain even with passive movement, my PCP finally ordered an MRI of my shoulder. The MRI revealed two partial bursal tears and a whole bunch of other crap. Apparently shoulders are very complicated.

I've been in contact with Dr. Google to get to the bottom of this as the MRI report appears to be in another language. My PCP does not think surgical intervention will be warranted (thank God) but I do have an appointment with an orthopedic surgeon this week. Hoping this doctor will be helpful and provide some guidance in where to go from here. I'd like to be able to touch the top of my head again.

That would be swell.

Hopefully there will be cortisone shots in my future that may provide some relief.

Because, obviously that's what I really need - another shot into my shoulder. :/
Posted by Elizabeth at 12:25 PM No comments: