So I saw Dr. R this past week. My appointment at DFCI was scheduled for 4:30 but I knew from past experience we would NOT be out of there until at least 7:00 or 8:00. ;) Via Patient Gateway I knew all my results ahead of time… my m-spike was up (which is the case at every appointment) and my CRP was high. Everything else looked pretty stable. In my opinion.

Prior to meeting with Dr. R I met with a myeloma specialist from Milan. To be completely honest, I'm not sure I understood one word she said and visa versa. Lost in translation! Oh well.

A while later Dr. R came in. He told me I was, "Last but certainly not least." Heh. I went into the appointment sort of assuming that I would hear, “Oh everything looks good, small increase, stable, see you in 3 months.” Such wasn’t the case overall. I have been having fevers since I was diagnosed with MGUS 4 years ago and I was reclassified as SMM last summer. After seeing numerous other specialists, Dr. R and my ID specialist concluded that the plasma cells were driving/causing my fevers. Anyway, during this appointment I actually had a fever of 102.2. After him having witnessed me having a fever for the first time - I’d never had one at an appointment before - he reiterated again the plasma cells are causing the fevers and he has seen periodic fevers happen in people with smoldering myeloma or symptomatic myeloma. He was also concerned my CRP was up as this is indicative of the level of IL-6 activity which is important in keeping myeloma cells alive/growing. So that's not good.

He told me to make sure to get a prescription for biaxin specifically if I do develop a sinus infection, respiratory infection, etc this winter along with fever as biaxin targets IL-6. He said he might consider at this time putting me on biaxin on a continuous basis. Biaxin is actually used in treatment of multiple myeloma in combination with revlimid and dexamethasone. But he said being young and female that probably wouldn’t be the best as continuous antibiotics can cause yeast / stomach upset. He said that if my m-spike continues to creep up and my BMBs increase we’ll need to “start the conversation” about treatment which may be “an antibody, vaccine, or immunomodulator.” I almost fell over that he even brought up the "T" word as I truly pray I am not there yet and won't be for a long, long, time.

Dr. R did say he believes my condition is evolving as my m-spike has grown consistently over the last 4 years as well as the fevers I've continued to experience. He again talked about how aspirin is going to be used in clinical trials for MGUS/SMM patients as it targets IL-6. He suggested continuous aspirin for me back in April but I stopped taking it but I should probably try to start taking it again. He also suggested trying naproxen in addition to daily aspirin to treat the fevers when I have them. I swear the amount of Tylenol/Advil/aspirin/naproxen I've taken over the last 5-10 years is going to cause me severe liver damage! He wants me to go back in 2-3 months for blood work and 24 hour urine. Monitoring me very, very carefully is the plan. Awesome.

I mentioned my shoulder pain from the wrongly administered flu shot and told him I had an MRI and had been referred to an orthopedic surgeon who I would be seeing soon. He was apologetic but nothing he can really do about that obviously. At the end of the appointment and to some degree "lighten" the mood I showed him a photo that was made by Myeloma Survival. 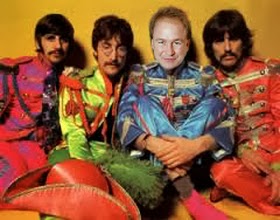 He totally cracked up. Wellllll...he IS a myeloma rock star. AND we actually walked out of Dana-Farber around 7:00PM - not too bad. AND they actually now have a receptionist working there now until 8:00PM.