NIH says, Your m-spike is going up? Is it?

Umm... are those statements or questions?!

Alright, the blog has been very neglected the past couple of weeks between all of my jet-setting to Nantucket and the NIH and with.... dun, dun, dun.... school starting! Needless to say things have been very busy.

So, let's recap. A couple weeks ago I traveled to the National Institute of Health / National Cancer Institute for my second visit for the Natural History Study of MGUS and SMM. I traveled by myself which was kind of a big deal since it was only the second time I've ever flown alone and I was a tad nervous. Of course my flight from Logan was mildly delayed and had to be rerouted due to bad thunderstorms in New Jersey. Bad start to the morning! I found out our plane was going to arrive at Reagan National a half hour late and I was going to miss the NIH shuttle I had planned to take. There was of course another shuttle (2 hours later) but I was worried I was going to be late for my appointment and I didn't want to wait around at the airport. So, I decided against my better judgement to take a cab.

I tried to convince the driver to give me a flat rate to NIH but he wouldn't budge. Twenty minutes and a ridiculously expensive cab ride later, I arrived at NIH. Of course because of tight security the cab couldn't bring me IN to the NIH so I had to take a shuttle to actually get to building 10 since I was dropped off at the entrance completely across campus from where I needed to be. Oh well. A short shuttle ride later I arrived at building 10, had my blood draw, and gave my urine sample. Easy.

I wasn't sure which doctor I would be seeing at this appointment. Back in February, I saw Dr. L, Dr. R and a whole slew of myeloma research fellows. My husband and I counted 8 different doctors in the room with us. Turns out this visit was quite a bit more low-key. I saw a really nice doctor named Dr. Q. In the appointment room she reviewed my interim labs from DFCI. As Dr. Q looked through the papers, she said to me, "Your m-spike is going up? Is it?"

Okay. And as I wrote at the beginning of this blog post... is that a statement or a question??!!

The thing is, as you look at my SPEP reports from 2009 to present, my m-spike is in fact, going up. BUT, it's still small and overall "stable" since January, but definitely higher than a year ago.

Dr. Q and I had some good conversations re: my FISH results, bone density, and family planning. It was nice to have a female doctor for once; she was very empathetic to my situation. She told me about a study starting at the NIH using PET scans with a new tracer that is currently used in Europe. They are waiting on FDA approval to start using this. She said she would call me in a couple weeks to review my blood tests. I will return for my third visit in 6 months, and then annually after that. There actually is probably a lot more to write about in regards to this visit than what I am writing, but this is all I have in me for now! I actually recorded my visit on my phone so I will have to review that sometime and share some more details in another post. :)

My second visit for the Natural History Study of MGUS and SMM (minus the stupid cab ride grrr) was no big deal. YAY! Although, I must add on the shuttle ride back to Reagan I did forget to tell the driver which airline I needed...went through the whole airport and I didn't get off the shuttle. Totally wasn't paying attention. Driver was not happy. Whoops. But, overall quite less uh, terrifying? than my initial visit.

And. The best part was my flight was billed directly to the NIH. And. I got a "meal voucher." Not bad for a day of travel, free second opinion, and donating about 15 vials of blood and a urine sample to myeloma research, right?

However...ahem, THIS is what I got back from the meal voucher: 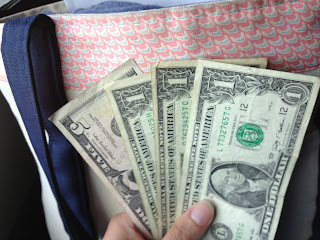 Let's see... a five, and three ones. Gee, that's eight dollars. Yes, that is correct. 8 bucks. It almost covered my bottle of water and muffin from the Au Bon Pan in building 10. ;)
Posted by Elizabeth at 8:43 PM