Needless to say I didn't get a lot of sleep the night after the possibly "abnormal" area on my arm was discovered. The NIH team requested I not eat after midnight in case they were able to get me in for a morning PET/CT. Didn't have much of an appetite anyway! To say I had knots in my stomach is a bit of an understatement.

In the morning I received a call from the research nurse who said I could go for a CT of my arm after my bone marrow biopsy and aspiration that afternoon. There were no available slots for a PET/CT that day. The CT of my arm would only take about 20 minutes. Sweet. PET/CTs, I know from experience take at least 2 hours -  one hour for the tracer to settle, and one hour for the actual scan. I was happy with the shorter test!

J and I headed to the procedure suite for my bone marrow biopsy. I was greeted by a nurse (also named Elizabeth!) who took my temperature by swiping this wand over my forehead then back behind my ear. That was a first. Again - NORMAL temperature. She also took my blood pressure and pulse. I met the research fellow who would be performing the biopsy and aspiration. She introduced herself, "Hi, I'm Dr. so-and-so. I'm actually from the myeloma research team here at NIH. I've heard a lot about you."

Apparently the myeloma team had discussed my case. She was going to do the biopsy on my left side since my biopsy in December was on my right. I mentioned to her how HORRIBLE my first biopsy was with the shooting pain down my leg. She said she would be very careful and that she had done many biopsies before.

I asked her how many aspirates she would be taking (I've have 4 vials for my other biopsies at Dana-Farber) and she said only ONE. Score. The aspirates are the most painful, in my opinion. The only difference between my biopsy at NIH and my biopsies at Dana-Farber was that there was a nurse, tech, and doctor, while at Dana-Farber I had just a PA and a tech with me. They also put all this crazy blue antiseptic all over my back. The procedure was fine, I feel like I'm becoming a pro at letting people suck out my marrow and bone. No big deal any more. This time the most painful part was when she injected the lidocaine - felt like a very long bee sting.

After the research fellow was finished I had to lay down for 15 minutes (never had to do that before - at DF they just sent me on my way) and I had to get a needle stick in my finger. Haven't had one of those since I was a little kid! Not really sure what that blood sample was for. The tech let me look at the biopsy - the piece of bone was tiny, smaller than my biopsies at Dana-Farber. Apparently they need less tissue at NIH? One aspirate vs. four and from my recollection a much smaller piece of bone.

After the biopsy was the CT scan of my arm. Sort of much ado about nothing. I had to wait forever in the second waiting room. Had a funny conversation with an older gentleman with the best southern accent I've ever heard. He kept saying how "cheeeeellllly" he was with his southern drawl. He was only wearing a tiny robe and slippers. Heh.

When I finally got called for the scan I was all set up but then apparently the computer froze while I was laying in this sort of weird position - almost part way off the table so my arm was more centered for the scan. After they "rebooted" the actual scan was literally 5 minutes I'm pretty sure. Probably less. Hopefully less radiation since it was just my arm? I hope so. After the CT we went up to the 12th floor clinic to meet with Dr. L, Dr. MR, and the research nurse.

So J and I were in the waiting room at the clinic when Dr. L, Dr. MR, and the research nurse came through the outside doors. I anxiously stared at them, trying to read their faces. Dr. L came over to me, smiled and whispered, "It's fine! It's fine!" The other doctor said, "Oh geez, we do respect privacy here but it's like Christmas for him, he can't wait!" HA. Kind of funny. Honestly, Dr. L really is a kind and compassionate doctor. I totally appreciate him not making me "sweat it out" and wait to hear the news until I got into the room!

They took us into a room and said the preliminary read of the CT scan was back... Apparently there is an "abnormality" on the inside of my left humerus, but it's not a lytic lesion (which I guess is on the outside of the bone). They said it would be very rare to have just one lytic lesion anyway. From what I understand, sometimes bones inside are not exactly smooth or even and my left humerus has an indentation on the inside. 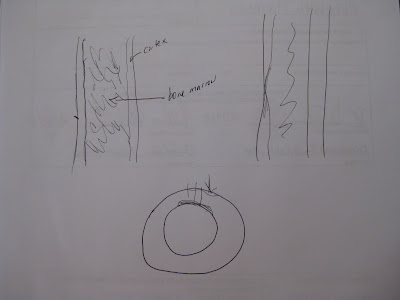 The drawing of the bone on the right is what my humerus looks like inside.﻿
﻿

The picture I posted above: the drawing of the bone on the left that has the labels of cortex and bone marrow and shows that little line coming out - that's apparently what a lytic lesion looks like. The bone on the right is what my humerus looks like. See that indentation on the inside? Yeah. The bone drawing below the other two is what my humerus looks like on the CT scan - it's a different view -  the inside part of the bone is uneven. The arrow on the top would be what a lytic lesion would look like, but mine does not have. Mine just has the unevenness inside, not outside.

The NIH team wants me to have the films from the skeletal survey and CT scan sent to Dr. R and have him compare my arm on the PET/CT from August to the CT of my arm from today. But overall, they aren't too concerned and it's just something to watch and see if it develops into anything. In the email response from Dr. R when I asked him about the PET/CT vs. CT of my arm, he said for me to "send best wishes to Dr. L" so I passed on the message - Dr. L said the same. So funny all these doctors know each other. I guess the myeloma community is pretty small.

Dr. L spoke about the gene expression profiling they are working on - apparently they have the profiles of 50 smoldering myeloma patients so far. He spoke about how important the bone marrow biopsy at the beginning of the study (now) is and then the importance of me getting a bone marrow biopsy at NIH again in 5 years. Basically he eluded to the fact that if I sign up to be in the study, these two bone marrows are really important. If I am going to be in the study, I need to be committed to coming back and, at the end, have another biopsy. Duly noted!

Don't worry Dr. L, I won't quit part way through your study and mess up your results!

Dr. L asked what Dr. R was planning to "do" with me. He said the standard of care is to "watch and wait" which I know. From this point forward I should just be monitored and assess my "clinical symptoms" as they come. Super.

This is actually an interview with Dr. L from about a year ago: Smoldering Myeloma: What Do The Latest Research Findings Mean? A Discussion With Dr. Ola Landgren

I know that treatment of patients with SMM is still in it's very, very, early stages and is definitely not the "standard of care." I, for one, would like to hold off on treatment as long as possible as people can smolder for years and years. I don't think I'm considered high risk right now anyway. However, there is something to be said for waiting too long to start treatment. If you have bone damage and your kidneys are failing - you've waited too long. The decision of when to start treatment seems very difficult to determine. It's a fine line to walk, especially for me being on the younger side; any medication I start taking would most likely be for the rest of my life because at this time myeloma is incurable.

In closing, I share with you this quote from the interview posted above with Dr. L:

Our ultimate goal is to find a cure for myeloma. It is an exciting time to develop new strategies for myeloma and its precursor states!

For sure. I signed the consent form for the Natural History Study and will return to the National Institute of Health / National Cancer Institute in 6 months.

Dr. MR, will call me with the results of my bone marrow biopsy and m-spike next week.
Posted by Elizabeth at 6:18 PM